Posted on 2015 January 23 by Abhinaya Rangarajan

The University of Tulsa, and Henry Kendall College before it, collected many of the materials that eventually would become the foundation of the department, decades before Special Collections and University Archives was created to manage them.

The earliest extant collection began with Alice Mary Robertson’s gift of her personal library in the late 1920s and in 1931, the bequest of her personal and family papers. Miss Robertson was a granddaughter of Samuel A. Worcester, a missionary to the Cherokee before the Trail of Tears. Her parents were missionaries to the Creek. Miss Robertson taught in mission schools, served as Postmistress of Muskogee, Oklahoma, and was the second woman elected to the United States Congress (1920-1922). Her personal and family papers provide important documentation of Cherokee,Creek, and Oklahoma history, and her bequest established a direction for collecting materials related to Native Americans that continues to this day.

In 1929-30, when the original part of McFarlin Library was built, the large room in the north end of the second floor (now the Student Study) was planned as a museum space to showcase Alice Robertson’s Native American artifacts. Other collections were also acquired to populate the museum. Among these were the Ellis Clark Soper Collection that included Civil War artifacts and western Americana, the Bright Roddy Collection made up of Navajo weaving and beadwork, and the James Wolfe Collection comprised of artifacts from Borneo.

The museum did not survive the 1930s, and while some of these materials have moved on to other collections elsewhere, many of the items have remained in Special Collections.

In 1975, former Tulsa businessman John W. Shleppey considerably enriched these holdings with his bequest of books and manuscripts by and about Native Americans which he had collected over his lifetime. The collection contained 6,000 books, including many rare volumes. In 1989, Special Collections’ Cherokee-related holdings were extended with the gift of the J. B. Milam Library of nearly 2,000 volumes. Milam served as Principal Chief of the Cherokee nation from 1941 to his death in 1949. 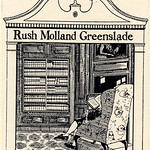 A second collecting direction began with a series of gifts in the early 1960s by members of the Tulsa Bibliophiles, a group of collectors active during the 1950s. As a group, the Bibliophiles set themselves the challenge of collecting Walt Whitman which they donated to the University in 1965. One Bibliophile, Rush Greenslade, gave his splendid collection of Charles Dickens, Sir Walter Scott, and 17th and 18th century editions of English writers. These two gifts established a base for more intense collecting of American and British literature to support a doctoral program established in the 1960s. During this same period, several collections were purchased from bookseller and collector John Bennett Shaw.

Special Collections began adding manuscript collections in the 1970s with the library and personal papers of literary critic Cyril Connolly. The manuscripts now take up over 2000 linear feet.

Today Special Collections houses over 140,000 printed books, and over 14,000 linear feet of manuscripts, music, photographic collections, ancient Native American pottery, artwork, etc. many of which may be found on the Library Catalog.

While Special Collections materials must be used in department reading rooms, these rich resources are available to all students and staff of the University as well as, without charge, to members of the public who would like to consult them. Visitors not familiar with the city of Tulsa will find it useful to consult Advice to Visitors.

This entry was posted in Guide to Literary and Related Materials, History, Uncategorized. Bookmark the permalink.