Posted on 2015 January 26 by Abhinaya Rangarajan

The Jack and Tybie Davis Satin Rare Book Room was originally, simply, the Rare Book Room when the 1967 east wing was built onto the McFarlin Library building.  During the planning stages for the new building, then president Ben Henneke questioned the need for a Rare Books Room, but acceded to the advice of friend to the University, Pauline Walter.  The appearance of the room has changed somewhat over the years. 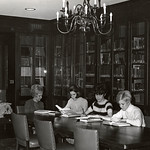 Initially, the Rare Book Room held the rare book collection, and offered scholars a place to study those materials in comfort. The alcove to the side was intended to be the librarian’s office. The rare books collections soon outgrew the room, and the manuscript collections pushed into the rest of the 5th floor. Eventually, the staff began to office in the current office area (although with a dramatically different configuration). The Rare Book Room was still used for readers at this time, although occasional events were scheduled in there as well.

Departments such as these functions are much like the laboratory required by the student of the physical sciences. Instead of test tubes, chemicals and sophisticated measuring devices, the student of literature and history can turn to those unique expressions found in manuscripts, correspondences, physical artifacts, or often to the transmission of text found in bound editions. In some cases these can be blended when a particular edition was owned by, and often annotated, by the individual or during the events being researched. 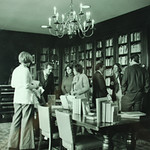 It is therefore part of the role of the Department to place the user in contact with those materials that can reach their needs, while at the same time protecting and preserving those same materials for the future. 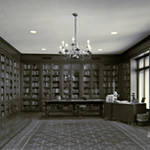 By the late 1970s, it was becoming obvious that the room, as it existed at that time, was inadequate as designed for a modern special collections department reading room. 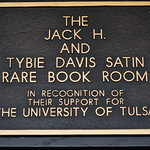 On 30 September 1980, the Department was renamed the Jack H. and Tybie Davis Satin Rare Book Room. It was about this time that the “fishbowl” reading rooms were built  elsewhere in the department, and the Satin Room was adapted for use as a classroom and event space. It is this configuration that most people tend to think of the room.

In 1984, Joan Skelly Stuart donated $28,000 in antiques and artwork to the University, including the Waterford crystal chandelier, and the round rosewood table (shown here). Over the next fifteen years, this room became a major, beloved showpiece for the university. 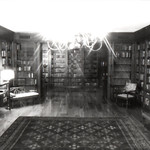 0, however, the Satin Room was showing sufficient wear   and tear to deserve a face-lift. Also by this time, the “fishbowl” reading rooms were obsolete, and were taking up far more space than they really warranted, so the decision  was made to remove them. Through the generosity of the Chapman Trust, the room was reconfigured once again into a more modern reading room for the Department of Special Collections, and fixed reading tables (based on those in the British Library) and large display cases were installed. 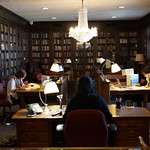 oom was closed for a few weeks as the old asbestos ceiling was stripped away, and in 2007 a modern fire suppression system and more security was added.