Posted on 2015 October 30 by Abhinaya Rangarajan

The Vietnam War was a Cold War-era proxy war that occurred in Vietnam, Laos, and Cambodia from 1 November 1955 to the fall of Saigon on 30 April 1975. This war was fought between North Vietnam- supported by the Soviet Union, China and other communist allies- and the government of South Vietnam- supported by the United States, Philippines and other anti-communist allies. The U.S. government viewed its involvement in the war as a way to prevent a Communist takeover of South Vietnam. 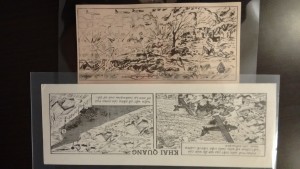 Some propaganda leaflets in our collection

Some of the leaflets that were disseminated sent a strong message. Some suggested that soldiers who did not leave their rank would find their family pictures distributed after their bitter death on the battlefield in the future. The Department of Special Collections and University Archives at the McFarlin Library, University Of Tulsa has its own collection of the South Vietnamese Propaganda. The collection [Coll. No. 2013.020] includes leaflets that were used in the time. The leaflets include a variety of information, some including graphic images of the wreckage by aircraft. Special Collection also has numerous books focusing on Vietnam War such as- The tainted war: culture and identity in Vietnam War narratives / Lloyd B. Lewis [DS559.5 .L49 1985] and Carrying the darkness American Indochina : the poetry of the Vietnam War / W.D. Ehrhart, editor [PS595.V5 C37 1985 Undrsz] to name a few.

Also of importance is the fact that during the Vietnam War, right about this time of the year in history – October 31, 1968, President Lyndon Johnson ordered a halt of American bombing of North Vietnam. This was followed by President Nixon’s announcing of withdrawal of troops marking the beginning of Vietnamization in 1969.

This entry was posted in Acquisitions, Collections, History. Bookmark the permalink.