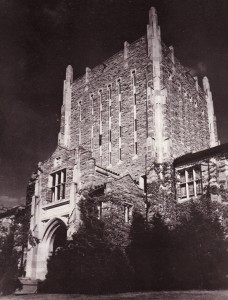 Last evening, the 7th of April, the McFarlin Library Fellows gathered for the last Fellows Dinner of the 2015-2016 year. Cocktails and conversation were enjoyed on the Albert Plaza before all enjoyed the culinary delights of Executive Chef Tim Anderson. Following dinner and dessert, all enjoyed the vivacious and talented Rachel Kushner’s presentation.

Kushner is a contemporary author whose novels explore the deep and changing world of the 1970s. Her first novel, Telex in Cuba, juxtaposes the social and racial hierarchies of an American sugarcane plantation in Cuba with the lives of those in Havana caught up in the political turmoil and eventual Castro revolt. Her most recent work, The Flamethrowers, explores the political and art communities in New York and Italy during the 1970s. Kushner artfully weaves art, motorcycles, New York artist communities and development with Italian radical politics and movements as seen through the eyes of a Young American woman.

Kushner delighted her audience last night with a witty and thought-provoking explanation of the images that guiding her journey in writing The Flamethrowers. Artists’ works and photographs from New York SoHo and East Village in the 1970s, as well as their Italian counterparts’ works, filled the projection screen as Kushner explained the historical background of her novel and her connection between the art and politics of the era.

Rachel Kushner helped the Fellows finish out the 2015-2016 year with a wonderful trip through her writing process and the promises on a third novel coming sometime in the future. The McFarlin Library Special Collections and University Archives wishes their Fellows all the best until the 2016-2017 year finds us once more joining together for food, fellowship, and delightful presentations.