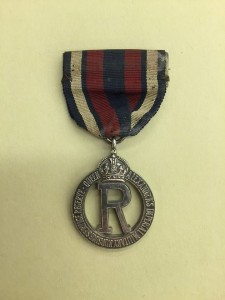 In 2010, the Department of Special Collections acquired a nursing journal and photograph album that belonged to Sister Alice Welford, Queen Alexandra’s Imperial Military Nursing Service Reserve, during the First World War. The Alice Welford Archive. Coll No. 2010.064 has just been digitized and may be seen in our digital collections here.

Alice Welford was born in Crathorne, Yorkshire in 1887 and came from a long line of shoemakers. She began training as a nurse in 1908 according to an article about her written by members of her family. In 1910, she began training as a probationary nurse at St Bartholomew’s Hospital in London. The journal in the collection contains her notes from this training, as well as other notes she had added later on. At the end of October, 1913, she was advanced from Probationary status, and in November of 1914 she graduated 17th out of the 24 in her class. 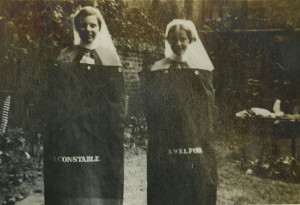 She applied for a passport and to join the Queen Alexandra Imperial Nursing Service. The QAINS was the Army nursing corps. In 1915, she was accepted and was transferred to a military hospital at Europa Point, Gibralter, where the photograph album begins, in June. We first see her with her friend E. M. Constable, aka “Connie,” almost certainly Sister Edith May Constable. Most of the images are described and some have specific dates. She has numerous pictures of the people she worked with and the patients. Some of the pictures she may have taken, others clearly she didn’t, for example the trench pictures that may be from Gallipoli. 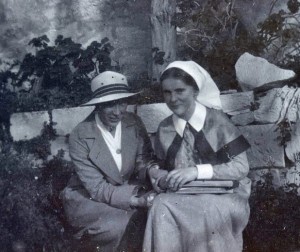 In February of 1916 she was transferred to St. Ignatius Hospital in Malta (Connie was apparently sent to St. Andrews on Malta). There she served until being transferred to Salonika in July 1917. While at Salonika, her brother was killed at Arras.

In January 1918 she was transferred again, this time to Basra, arriving there on the 8th. A week later, on 15 January 1918, while en route to a welcoming dinner party at a place called Mohommerah, the motor launch she was riding in was sliced in two by a steam tug. Sister Alice Welford, two other nurses and a VAD drowned in the Shatt al-Arab waterway south of the confluence of the Tigris and Euphrates Rivers. She was buried there, in Basra, in the Makina Cemetery, Line G, Grave I.G.13. 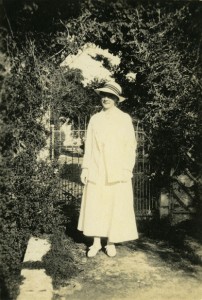 What is probably the last image made of Alice Welford, as she is dressed for traveling and is the final picture in the album. This would be July 1917, and was taken in the Garden at St. Ignatius Hospital, Malta, best before she was sent to Salonika. 2010-064-1-46-2

There are several minor mysteries about this collection, not the least of which is why wasn’t this material with her autograph album which is now in the possession of the family. From the dating in the pictures, it’s possible that her effects were separated when she was transferred to Salonika. Interestingly, tucked in the album was a post card written to Sister Welford a few months after her death.  Another mystery is why she stopped writing descriptions in the album after April 1917.

The collection is important because it shows the lives of some of the women who were in the War, and as we are in the centenary of that conflict, it has become clear that the study of women’s roles has been tragically overlooked.

It should be noted that Sister Welford’s great-niece Valerie Watkins, and her husband peter, have kindly shared with me a copy of their article on Sister Welford: Watkins P, Watkins VJ. Alice Welford (1887-1918), a nurse in World War I: The impact of kindness and compassion. J Med Biogr. 2015 May 29.

The Librarian of Special Collections and University Archives, McFarlin Library, The University of Tulsa since November 2005.He holds a Masters in Library and Information Studies from the University of Oklahoma, and a Bachelor of Arts in History and Anthropology from Oklahoma State University. He has worked in McFarlin Library since 1986.
View all posts by Marc Carlson →
This entry was posted in Collections, History and tagged Great War, history, nurses, photographs, World War I, World War One, WWI. Bookmark the permalink.