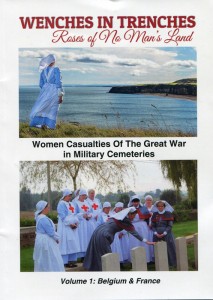 Woman Casualties of the Great War in Military Cemeteries.

This is the first of an expected series that will record the locations of the known British and Commonwealth women who died in the First World War in the battlefields, specifically nurses, VADs, Auxiliaries, YMCA workers and more.  There are a some American war cemeteries listed also.  It should be noted that these are the women who were buried in Belgium and France, and not necessarily those who were killed.  Edith Cavell, for example is not listed as she was buried in Britain.

Wenches in Trenches is a group that raises funds for memorials for the nurses and VADs who served, as well as other worthwhile charities.  They also have an annual walk through the battlefields of the western front.  They have a Facebook community page.

The author, Lucy London, has been working on, among other things, Female Poets and Forgotten Poets of WWI.  More about her can be found on her Facebook pages:

The Department of Special Collections and University Archives has been collecting World War I materials for the past thirty years.  One of the areas that entails is the medical history of the war as well.

The Librarian of Special Collections and University Archives, McFarlin Library, The University of Tulsa since November 2005.He holds a Masters in Library and Information Studies from the University of Oklahoma, and a Bachelor of Arts in History and Anthropology from Oklahoma State University. He has worked in McFarlin Library since 1986.
View all posts by Marc Carlson →
This entry was posted in Acquisitions and tagged acquisitions, Great War, history, memorials, nurses, World War I, World War One, WWI. Bookmark the permalink.