Posted on 2017 January 19 by Jennifer Murphy

The Andre Deutsch collection [Coll. No. 1988.013] is one of the largest in Special Collections and University Archives. It contains editorial, production, and publicity files for approximately 2000 books published by the Andre Deutsch London firm. Most of the folders hold first drafts and the exchange of ideas between author and editor. This collection includes correspondence with authors, such as Jean Rhys, Stevie Smith, Timothy Mo, V.S. Naipaul and many others. It also consists of the work of Deutsch editor Diana Athill – who is considered to have influenced women’s writing in Britain.

A second shipment of Deutsch material arrived at Special Collections in 1989. It included the Children’s Literature material and likely the Rhys/Atwood correspondence. This collection is organized into three series. In the first and third series, the folders are organized by author first, then title. In the second series, the materials remain in the organization system used by the firm. Some of the Jean Rhys material was rehoused with the Jean Rhys archive, Coll. No. 1976.011.

Deutsch is definitely our largest but least written about collection due to its vast and versatile material. It is difficult to narrow in on one topic when there are 737 boxes from which to choose. I have chosen to write an excerpt on Toni Frissell. 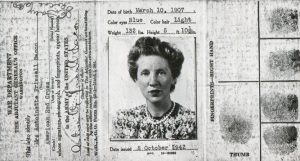 Toni Frissell was an American photographer. She first became involved in the industry after her brother, Varick, introduced her to photography. Varick’s death and her lack of interest in acting led to a brief occupation working for Vogue as a caption writer. She was fired from this position for her poor writing skills, but soon published her first photograph in Town and Country. Her images earned her a contract back at Vogue under the direction of Cecil Beaton. In her later work, she would take high fashion photographs for Harper’s Bazaar, celebrity portraits for Life magazine, and active women photographs for Sports Illustrated.

Pictured below: Frissell at 10 Downing Street London to photograph Churchill. 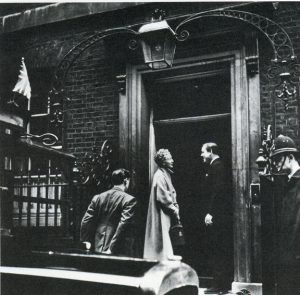 Frissell is also well-known for her photographs of World War II. She partnered with groups such as the American Red Cross, Eighth Army Air Force, and Women’s Army Corps. She took all kinds of war photographs, some of which were used as war media. Frissell had strong similarities with other female photographers at the time, such Louise Dahl Wolfe and Lee Miller, who also worked for Vogue and Harper’s Bazaar.

The Toni Frissell Collection was first published in 1994 by the Andre Deutsch firm. This collection now resides at the Library of Congress and includes over 300,000 photographs dating from 1935 to 1970.