Last night, February 16th, members of the Special Collections department had the privilege of attending the first McFarlin Fellows dinner of 2017. The Fellows are an integral group of donors without whose help McFarlin Special Collections and Archives would not be able to purchase new collections that encourage intellectual development for not just TU and Tulsa but also for researchers from around the country and the world.

As always, the night began with a cocktail hour filled with conversation and catching up. Following the cocktail hour in the faculty study lounge, we moved downstairs for dinner. As dinner came to a close, Adrian Alexander, the Dean of McFarlin Library, informed the Fellows of the large number of researchers who have utilized Special Collections recently and the subjects they are studying. He then introduced the speaker for the evening: Randall Fuller, the Chapman Professor of English and Chairperson of the English Department at TU. Dr. Fuller presented his recently published book The Book That Changed America: How Darwin’s Theory of Evolution Ignited a Nation. Since its publication at the end of January 2017, it has gained acclaim and has had such praise as “evocatively told” (The Atlantic) and descriptions of Dr. Fuller as a “lively, engaging writer, with an eye for detail” (The New York Times). 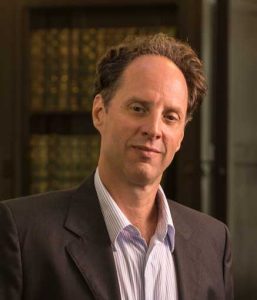 Dr. Fuller described to the gathered crowd how Darwin’s On the Origin of Species first came to America. Darwin himself sent 3 copies of the book to America in late 1859 to 3 separate acquaintances. One of these copies was sent to Asa Gray, a highly respected botanist at Harvard. His copy remains at Harvard University and Dr. Fuller was able to examine it while doing his research for the book.

The book opens with a small dinner party where Charles Loring Brace (cousin of Asa Gray who had borrowed Gray’s copy of Darwin’s book), Amos Bronson Alcott (father of Louisa May Alcott) and Henry David Thoreau at Franklin B. Sanborn’s home on New Year’s Day 1860. These men began discussing the recent execution of John Brown which led them to discuss abolition. Charles Loring Brace began telling the others gathered of Darwin’s theory that all species of animals and plants had developed from a common ancestor. Although Darwin left humans out of his theory, it was easy for the men to assume it would apply to humankind as well and they used it to support their ideas of abolition. This was part of a much larger nationwide debate that would eventually lead to the Civil War. Dr. Fuller’s book follows essentially 3 threads of the effects of Darwin’s book in America: religion, politics, and ideology. If Dr. Fuller’s book is half as interesting and dramatic as his lecture, then it is an engrossing read.

For more information on Dr. Fuller and his other works see his page on the TU website at: https://faculty.utulsa.edu/~/randall-fuller. To find out more about the McFarlin Fellows visit the library’s page on them: https://utulsa.edu/mcfarlin-library/giving-to-mcfarlin/mcfarlin-fellows/. 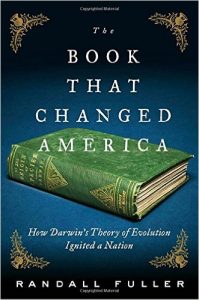 This entry was posted in Fellows Events and tagged Darwin, Dr. Randall Fuller, McFarlin Fellows, The Book That Changed America. Bookmark the permalink.