Posted on 2017 February 28 by Jennifer Murphy

Happy (belated) birthday to John Steinbeck the renowned American novelist – born February 27, 1902 in Salinas, California. Most of Steinbeck’s writings are drawn from his life in the Salina Valley of California and include the social and economic issues of that time period. His parents’ occupations included a county treasurer and a former school teacher. In 1920 Steinbeck attended Stanford University. He dropped out of college in 1925 and decided to work as a manual laborer and freelance writer. His book, The Grapes of Wrath (1939), caught the attention of the public for its realistic portrayal of the Great Depression. After his rise to fame, Steinbeck served as a World War II correspondent for the New York Herald Tribune and was awarded the Nobel Prize for Literature in 1962. He died on December 20, 1968 at his home in NYC. 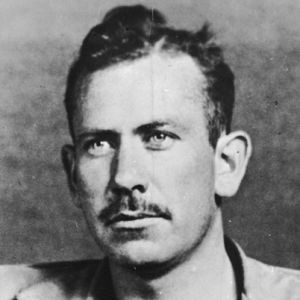 February 5th was the eightieth anniversary of the publication of Of Mice and Men (1937). The title is said to be inspired by the poem “To a Mouse” written by Robert Burns in 1785. This novella depicts the story of two friends searching for ranch work during the Great Depression in the United States. The story depicts the struggle to fulfill the American dream. Special Collections and University Archives has fifteen different editions of Of Mice and Men, including the galley proofs for Of Mice and Men, acquired in 1960 alongside four other modern authors: William Faulkner, Ernest Hemingway, Katherine Mansfield, and Thomas Wolfe. One of our Of Mice and Men editions was published by The Limited Editions Club in New York in 1970. It has an introduction by John T. Winterich and includes twenty-four water colors by Fletcher Martin. 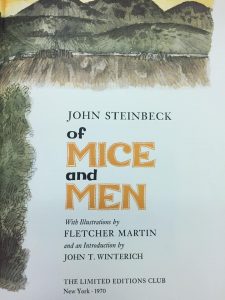 The novella is considered to be based on Steinbeck’s own experience as a traveling worker. It made the Banned and/or Challenged Books from the Radcliffe Publishing Course Top 100 Novels of the 20th Century. It was considered to have vulgar and offensive language. It is still required, however, to be read in many middle and high schools to this day.

“I seen hundreds of men come by on the road an’ on the ranches, with their bindles on their back an’ that same damn thing in their heads . . . every damn one of ’em’s got a little piece of land in his head. An’ never a God damn one of ’em ever gets it. Just like heaven. Ever’body wants a little piece of lan’. I read plenty of books out here. Nobody never gets to heaven, and nobody gets no land.” Crooks to Lennie, Section 4, Of Mice and Men 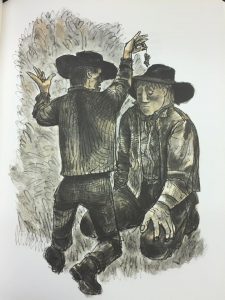 This entry was posted in Acquisitions, Birthday, Collections, literature. Bookmark the permalink.