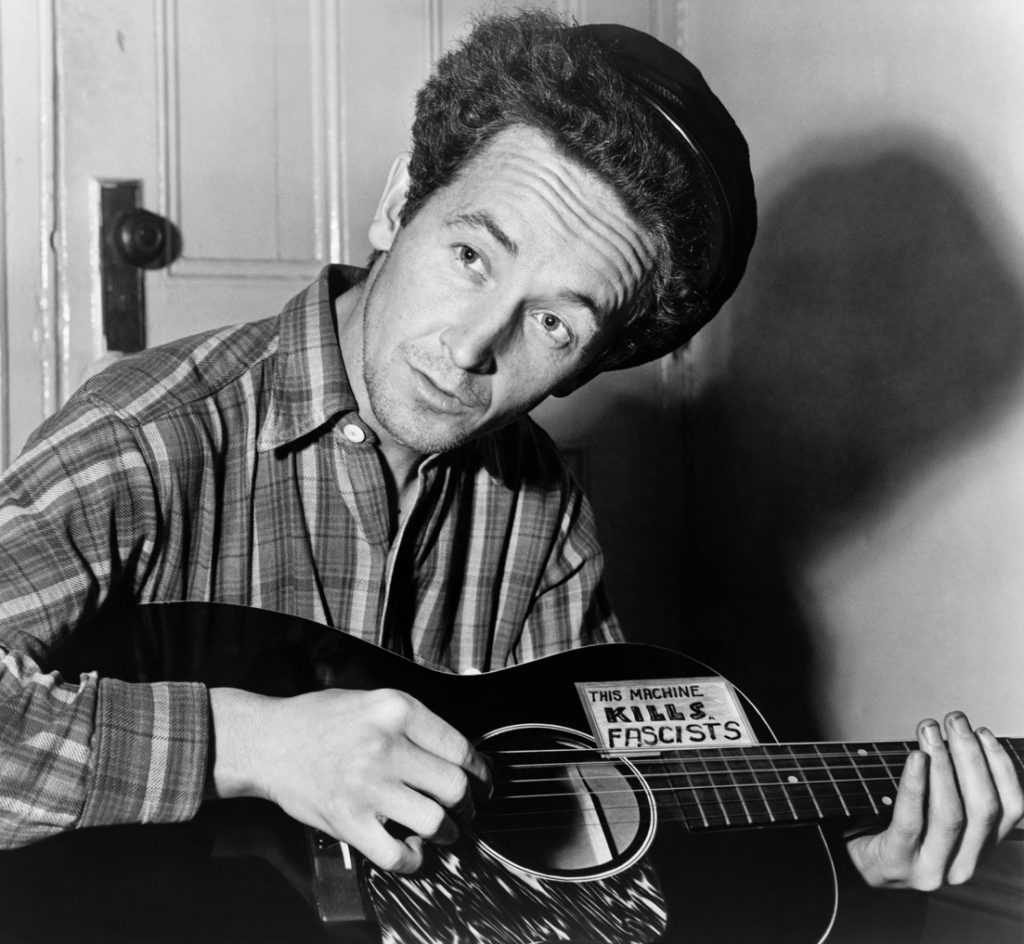 Woody Guthrie / By Al Aumuller/New York World-Telegram and the Sun  – This image is available from the United States Library of Congress’s Prints and Photographs division under the digital ID cph.3c30859.

Woody Guthrie, a singer-songwriter, poet, and artist, was born in Okemah, Oklahoma on July 14th, 1912.

One of the most prominent members of the American folk music scene, Guthrie learned to play blues and folk songs from friends of his parents. During the Oklahoma Dust Bowl storms, he traveled to California and worked for a radio station, playing folk music and writing protest songs. He also wrote newspaper columns for a Communist newspaper called People’s World. Although Guthrie once said that he joined the Communist Party in 1936, he was considered a “fellow traveler,” someone who believed in the values and political ideals but who was not officially a member and therefore not subject to party discipline.

Guthrie was most famous for writing the song “This Land Is Your Land” in 1940 as a response to hearing Irving Berlin’s song “God Bless America” played frequently on the radio, which he thought was “complacent and unrealistic” as a song. Four years later, the lyric sheets were being distributed in American public school classrooms. During this period of time, Guthrie recorded an album of songs and conversation with Alan Lomax for the Library of Congress, and later an album called Dust Bowl Ballads.

In addition to being a singer-songwriter, Guthrie was a prolific writer and artist, and many of his poems and prose are unpublished, created while he was living in New York City. At Alan Lomax’s suggestion, Guthrie wrote Bound for Glory, an autobiographical novel.

Guthrie also wrote another novel in 1947, specifically about the Dust Bowl, called House of Earth, which was unpublished for many years until 2013, when it was released by Harper Books.

Special Collections houses the original final typed manuscript that belonged to Woody Guthrie, complete with his handwritten doodles at the top of chapters. Other manuscripts of short stories by Guthrie are also available in our collection. You can find the inventory here.

This piece of American history and literature is available to the public for viewing. If you would like to visit The University of Tulsa Department of Special Collections, our reading room is open from Monday – Friday, 8am to 4:30pm (11:30am on Fridays in the summer). For viewing appointments, please call (918) 631-2496 or email us at speccoll@utulsa.edu.

Melissa Kunz is a Special Collections Librarian. She holds a Masters in Library and Information Studies and a J.D. from the University of Oklahoma, and a Bachelor of Arts in English from Hendrix College in Arkansas.
View all posts by Melissa Kunz →
This entry was posted in Birthday, Collections and tagged americana, birthday, bound for glory, Famous Birthdays, folk music, house of earth, Woody Guthrie. Bookmark the permalink.