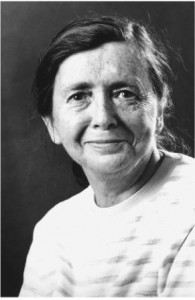 Elizabeth Jennings, an English poet, was born in Boston, Lincolnshire, on July 18, 1926.

Jennings’ family moved to Oxford when she was six years old. She attended St. Anne’s College at Oxford, and became a writer, with her first book, Poetry, published in 1953.

The writer lived in Oxford for the rest of her life, and both the landscape and the general atmosphere contributed to the nature of her poetry. World War II was a strong influence and caused her poetry to become more empathetic. Jennings was Roman Catholic and frequently wrote on the subjects of religion and the sacrifice of Jesus Christ.

Her works are noted for their traditionalism and simplicity, which tends to place her with other poets of the time and location such as Philip Larkin and Kingsley Amis, who were collectively known as The Movement. However, Jennings experienced mental illness and a breakdown later in life that resulted in a stay at a psychiatric care facility where she befriended Viviene Greene, the wife of Graham Greene. This produced more experimental poetry that focused on difficult emotional themes.

Special Collections has a large Elizabeth Jennings collection, the inventory of which can be found here. The collection contains 39 notebooks and drafts of 2,225 poems, many of which were unpublished at the time of acquisition.

If you would like to access and view these papers, Special Collections is open to the public from 8am to 4:30pm Monday – Friday (on Fridays in the summer we close at 11:30am).

Please email us at speccoll@utulsa.edu to set up a viewing appointment, as the Jennings papers are located in a storage facility separate from campus—we require 24 hours notice before the collection can be made available.

Melissa Kunz is a Special Collections Librarian. She holds a Masters in Library and Information Studies and a J.D. from the University of Oklahoma, and a Bachelor of Arts in English from Hendrix College in Arkansas.
View all posts by Melissa Kunz →
This entry was posted in Birthday, Collections and tagged british author, elizabeth jennings, oxford, poems, poet, poetry. Bookmark the permalink.