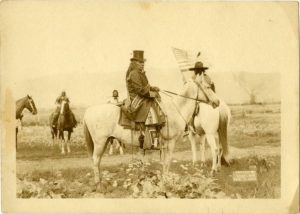 Edward H. Boos (1877-1937) was a photographer and journalist who took a tremendous number of images  on the Flathead Indian Reservation in the Flathead and Missoula valleys of Montana in 1905-1907, specifically of the Ktunaxa (Kootenai), Bitteroot Salish and Upper Kalispel “Pend d’Oreilles” people of the Confederated Salish and Kootenai Tribes of the Flathead Reservation.

There are 16 prints, most bearing Boos’ seal and copyright dates.  Context suggests that they were made by the photographer before his death.

We acquired these materials in September 2003.

Other institutions with Boos’ photos are The Denver Public Library (who hold 131 glass negative, including many for the prints in our collection), and Archives and Special Collections, Maureen and Mike Mansfield Library, The University of Montana-Missoula (again, some overlap, but they also have images Boos took of the U.S. Army 25th Infantry (African American) Bicycle Corps’ experimental expedition from Fort Missoula to St. Louis, Missouri in 1897.