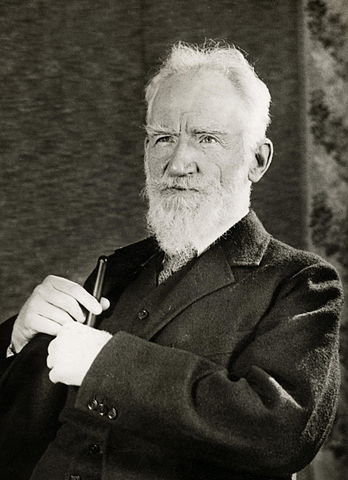 Photograph of George Bernard Shaw. Photographer unknown, image is in the Public Domain. Sourced from https://commons.wikimedia.org/wiki/File%3AGeorge_Bernard_Shaw_1936.jpg

George Bernard Shaw, a playwright and critic, was born on July 26, 1856 in Dublin, Ireland.

Shaw preferred to be known only as Bernard Shaw, and held both British and Irish citizenship. He moved to London in the 1870s and soon became a renowned music and theater critic. His first publicly successful play was Arms and the Man, written in 1894. He underwent a political awakening, joining the gradualist movement, and used his creative works to further express his political and social ideas.

The author found great success on the stage, particularly with Pygmalion in 1913, and went on to write over 60 plays in all.Shaw was known for writing a combination of comedies and serious philosophical dramas, and his plays were most profitable in print form. One anecdote says that Edward VI attended John Bull’s Other Island and laughed so hard that he broke his chair. His works are considered on par with Shakespeare in terms of their influence and importance to the Western canon of theater.

Shaw’s politics and opinions were notably controversial and sometimes contradictory. He supported eugenics, opposed the use of vaccines because he felt that better housing for the poor would help eradicate disease, and criticized organized religion. During World War I, he denounced both sides as equally culpable because of their participation in acts of war, an unpopular view at a time when patriotism ran high. He was a supporter of Irish Home Rule, but within Britain itself, and spoke out against Irish nationalism, saying that total independence would leave Ireland too weak. Later in life, he expressed admiration for Stalin and Mussolini, supported interracial marriage, and deemed it necessary for Europe to be “fair” to Adolf Hitler while simultaneously writing about his disgust with Anti-Semitism.

Among his other works includes alphabet reform. Shaw wrote in his will that after his death, he wanted his estate to fund an effort to rewrite the English alphabet to be made up of 40 phonetic characters. Although the courts invalidated that desire based on the way the document was drafted, some of his money did go toward producing a copy of Androcles and the Lion written in what is known as the Shavian alphabet. The book was published in 1962.

Special Collections houses the George Bernard Shaw ephemera collection, the finding aid for which can be found here. It contains correspondence with Shaw, programs from theatrical productions of his works, and other items. We also have many of Shaw’s plays and written materials in our book holdings, along with a copy of Androcles and the Lion written both in English and in the Shavian version of the text.

We are open to the public Monday – Friday, 8am to 4:30pm (on Fridays in the summer we close at 11:30am). If you’d like to make an appointment to view the Bernard Shaw materials, please email us at speccoll@utulsa.edu.

Melissa Kunz is a Special Collections Librarian. She holds a Masters in Library and Information Studies and a J.D. from the University of Oklahoma, and a Bachelor of Arts in English from Hendrix College in Arkansas.
View all posts by Melissa Kunz →
This entry was posted in Birthday, Collections and tagged androcles and the lion, birthday, George Bernard Shaw, George Bernard Shaw Ephemera, pygmalion, shavian alphabet. Bookmark the permalink.