Posted on 2017 October 9 by Jennifer Murphy

We had very special guests this weekend at the Department of Special Collections and University Archives. A group from ZCZ Films, a UK film company, was commissioned by the BBC to produce a three part series on American Art. The series is expected to come out at the end of 2017 and will be presented by Waldemar Januszczak of the Sunday Times. ZCZ’s primary goal is to inform British audiences of the vast amount of art produced from America during the 19th and 20th century with the inclusion of lesser known artists. They were most intrigued by our vast collection of works by Alexandre Hogue. Some of our most popular Hogue paintings include ‘Lava Capped Mesa, Big Bend’ (1976) and ‘Howdy Neighbor’ (1936), which is the only self-portrait of Hogue. 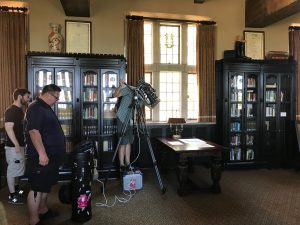 Alexandre Hogue was an American realist painter who was part of the Dallas Nine during the 1930s to 1940s. Hogue grew up in Dallas, Texas, and was later employed as the Dallas Morning News illustrator and Texas State College for Women art teacher. At one point, he briefly moved to New York to work in calligraphy but, eventually, settled back in Texas to paint. Our very own Adrian Alexander, Dean of McFarlin Library, told us a story of how Hogue made instruction manuals with hand drawings during World War II for individuals who were illiterate or semiliterate. 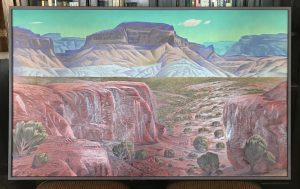 A majority of Hogue’s work focuses on Southwestern and Midwestern landscape. During 1945 to 1963, Hogue was head of the Art Department here at the University of Tulsa. That is why McFarlin Library, Gilcrease Museum, and Philbrook Museum of Art hold some of Hogue’s works.

If you are interested in learning more about their work, here is a link to Waldemar’s website and the ZCZ company website where past productions can be found. To view the Hogue Collection (Coll. No. 1968.001) or any of our other collections, please visit our department on the fifth floor of the McFarlin Library anytime Monday to Friday from 8:00 until to 4:30 p.m.