Bobo the Clown and Circus Fascination

Most people have heard of Bozo the Clown, but what about Bobo the Clown? Chester “Bobo” Barnett was a clown throughout much of the 1900s, with his career starting in about 1920 and ending in about 1970. One of the most notable circuses he traveled with is the Cole Bros. Clyde Beatty Circus. This is also the Circus in which he met his third wife, Dorothy, with whom he would go on to have his daughter, Bonnie. Bobo also performed with the Shrine Circus, which is still in operation today. “Bobo” was inducted into the International Clown Hall of Fame in 2010, recognizing him as an outstanding clown performer with a long running career.

During his years with the Cole Bros. and Shrine Circuses, Bobo made several guest appearances, including at least one on the Ed Sullivan Show. He was famous for making people laugh, and even had the opportunity to meet some of the Presidents of the time.

His third wife, Dorothy, was a dancer in the Cole Bros. Circus, when they met. After both losing their performing partners, who actually got married to each other, they decided they should begin performing together. Shortly after, they did just that. They spent the next ten years performing side-by-side, and eventually got married and had a daughter. However, their marriage ended up failing and they decided to part ways in the early 1950’s. 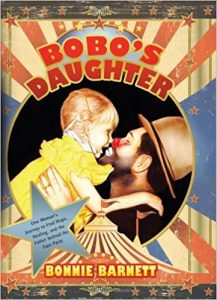 Bonnie’s book about her father.

Bobo’s daughter, Bonnie, went on to live with her mother, but was remained intrigued by her father’s life. The first time she met him, she was around 4 years old, and he was in his clown makeup and costume. She recalls being scared at first but then somewhat amazed. The next time she saw him, he was not in his makeup, and she was actually terrified and didn’t recognize him. In her mind, her father was the clown, and seeing him not as a clown, well it was wrong. She spent much of her childhood seeing him only on TV and receiving gifts from him here and there. In her mid-twenties, she decided to write a book about her family, highlighting the experience of growing up with a famous clown father and an ex-circus mother. The drive behind her writing was her fascination with her father’s involvement in the circus. And she wasn’t the only one with this fascination.

At the time, the circus was a main form of entertainment, and was affordable to the general population. There weren’t many other activities where people could see acrobats and elephants all under one roof. So any time a circus was in town, you could be sure the tents would be full by show time. 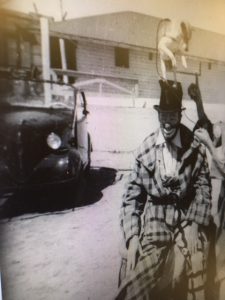 Bobo and his dog practicing for the big night!

Here at McFarlin Special Collections, we are lucky enough to several albums that showcase the Circus of the 1900s. Within these albums, you can find pictures of backstage operations of several different circuses, including the Cole Bros. Clyde Beatty Circus. The photographs range from animals, to performers, to transport and train cars. They provide the audience with a detailed look at what circus life was like behind the scenes. Among these albums, you can also find one that contains photographs of Chester “Bobo” Barnett himself. One such photograph is presented here.

The circus has remained a fascinating affair, despite controversy in recent years, and Clowns have remained an integral part of circus entertainment, despite their occasional negative representation in popular culture (most recently, the remake of Stephen King’s “IT”). If you find yourself curious about the Circus and the mysterious lives of the performers, feel free to stop by Special Collections during our hours of operation (Monday-Friday: 8:00-4:30) and take a peek at one of the albums for yourself.