The forgotten heroes: Dogs as soldiers

Posted on 2017 November 10 by Emily Caselman

This November 11th marks the 91st official Armistice Day, better known as Veteran’s Day. The holiday dates back to November 11th, 1926, when Congress adopted a resolution in the summer of that year, requesting that the President honor the day with proper ceremonies and dedication to peace. At this time, the holiday was to be known as Armistice Day, a celebration of the end of WWI and those who fought. The day became a legal holiday in 1938.  Then, in 1945, WWII Veteran Raymond Weeks decided the day should be expanded to all Veterans, not just those who fought in WWI. So he changed the celebration to be inclusive. In 1954 a bill was passed that renamed the holiday Veterans Day, and it has been known as such ever since.

Countless men and women have fought for our great country over the years in order to preserve the freedom we cherish so dearly. But what is sometimes forgotten is that they were and are not alone on the battlefields. Some of the most over-looked war heroes are animals. Whether it be horses, who were a huge part of early warfare, or dogs, who are still commonly seen on the battlefield today, these animals played an intricate role in military strategy. 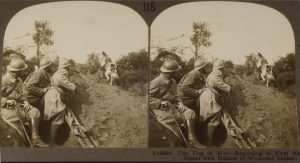 Red Cross dog bringing a helmet back to the trenches!

While horses have somewhat faded from military use over the years due to advancements in vehicles, dogs have remained a large component of many troops. During WWI dogs served as Red Cross members and tended to those injured or killed in the line of fire. While they couldn’t bandage up a soldier or perform a surgery, dogs could lead people to where injured soldiers were, and in some cases drag those soldiers to safety. 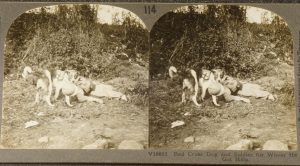 leading them to the injured soldier!

They would bring an item back from a soldier, such as a helmet, and show the soldiers or Red Cross Members in the trenches, and then lead them to the soldier from which they retrieved the item. This prevented soldiers and medical staff from wondering around the battlefield blindly looking for injured and risking their own safety.

Over time, the role of dogs in American warfare has changed and expanded. They have been used for attacking and subduing enemies, logistics and communication, detection, tracking, and as scouts. One of the more recent famous instances of a dog in warfare is the use of a Belgian Malinois in Operation Neptune Spear, the operation in which Osama Bin Laden was killed. This dog severed several purposes including alerting soldiers of the presence of other individuals, the arrival of Pakistani troops, the existence of secret rooms, and tracking various scents.

Dogs in warfare have also reached their way into popular culture with movies such as “Max” released in 2015, and “Megan Leavy” released earlier this year. In McFarlin Special Collections we have several images from WWI of dogs in training, as well as active on the battle field. Military Dogs can be seen leading Red Cross members to injured soldiers, enjoying time in their encampment, and patiently waiting next to pilots, just to name a few. If you’re interested in looking at some of these images as well as several other intriguing ones, feel free to stop by Special Collections during our operating hours (M-F 8:00-4:30) and take a peek!