Posted on 2018 February 2 by Amanda Vestal 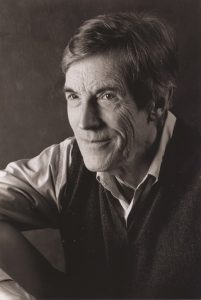 It was with great sadness that we were informed about the death of the Irish poet Richard Murphy. He passed away on Tuesday January 30 in Sri Lanka, a country he clearly loved as he had spent part of his childhood and much of his later life there. Murphy studied under CS Lewis at Oxford where he received his Master’s Degree in 1955. His poetry was well-known for its historical accurateness and its ability to capture the essence of the small Irish fishing towns where he ran fishing and tourism businesses that helped revive the industry. His poetry often focused on the clashing of communication and cultures which he used to help settle his feeling of a divided self. Murphy was known for his exquisite reading voice and his dedication to his craft. His autobiography, The Kick: A Life Among Writers, came out in 2002 and details both events from his personal life and the legacies of Irish history that continue to affect the region. McFarlin Special Collections is fortunate to house the Richard Murphy archive containing the poet’s manuscripts and correspondence. Murphy’s contribution to Irish literature will live on in the new generation of artists that he influenced through his works, his time spent teaching at various universities, and his participation in many workshops.