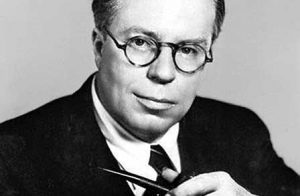 Christopher Morley was an American journalist, novelist, essayist, and poet. He also produced several stage productions and toured giving college lectures. Morley was born in Bryn Mawr, Pennsylvania on May 5, 1890. He got his love for literature and poetry from his mother. Morley graduated from Haverford College in 1910 where he was father was at one time a math professor. He spent three years at New College, Oxford as a Rhodes scholar studying modern history. In 1913 he moved to NYC where he married his wife, Helen, the next year. He began writing while at Haverford and at Oxford he published his first volume of poems, The Eighth Sin. He got his first job in literature as a publicist and publisher’s reader at Doubleday. He then went on to be an editor for Ladies’ Home Journal and then as reporter and columnist for the Philadelphia Evening Public Ledger. His first novel, Parnassus on Wheels, came out in 1917. Morley was one of the first judges for the Book of the Month Club and worked for them until the early 1950s. Morley wrote over 100 novels, books of essays, and volumes of poetry throughout his career. He passed away on March 28, 1957 and was buried at the Roslyn Cemetery in Nassau County, New York. 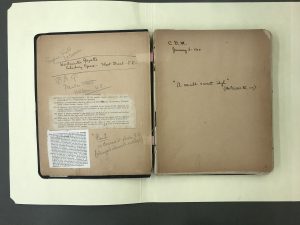 The Elizabeth Melvin Chamberlain Collection of Christopher Morley (1996.006) consists of one box containing a manuscript notebook with handwritten transcriptions of others’ work as well as notes and poems by Morley himself; a letter from Morley to Rachel Brand of Kroch’s Bookstores, Inc.; press cuttings; and other elated ephemera. To look at the finding aid for this collection go here.

This entry was posted in Collections and tagged Christopher Morley, journalism. Bookmark the permalink.