The War at Home – Tulsa in the World War 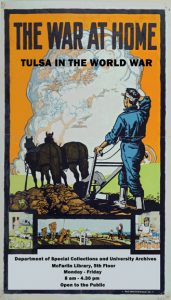 In the first week of April, 1917, the United States finally entered the World War, in response to not only of the German determination to return to unrestricted submarine warfare, but also the continual espionage against United States industry by agents of the German Empire, as well as discovery of the Zimmerman Telegram by the British – by which the Germans were trying to encourage the Mexican Government to engage the United States in a separate conflict in response to our incursion into Mexico in 1916; to try to keep us out of the European War.

With the Declaration of War the Unites States began the process of mobilizing for what looked to be a protracted war.  The people of the United States responded, in general, with patriotic enthusiasm.

Tulsa was notably aggressive in its response.

Many good things came out of Tulsa’s involvement, but there was a darker side to it as well.

The purpose of this exhibit is to show the various aspects of the war and its effect on the city, both good and bad.  We will also briefly discuss the people who actually fought, the Greenwood District and the Influenza Pandemic of 1918.

This exhibit will remain up until the end of 2018.

The Librarian of Special Collections and University Archives, McFarlin Library, The University of Tulsa since November 2005.He holds a Masters in Library and Information Studies from the University of Oklahoma, and a Bachelor of Arts in History and Anthropology from Oklahoma State University. He has worked in McFarlin Library since 1986.
View all posts by Marc Carlson →
This entry was posted in Exhibits and tagged exhibit, Great War, Tulsa, World War I, World War One, WWI, WWII. Bookmark the permalink.