I imagine that few people ever anticipate that their personal letters will eventually end up in a library or an archive for anyone to see. I have been processing the Edward L. Brown Archive, which consists primarily of letters between Edward Brown and Leila Owens, as well as people they each knew. The bulk of their letters occur between 1916 and 1919, but despite being a century old, their relationship feels as relatable as if they were still alive today.

Edward L. Brown of Dallas, Texas, began writing letters to Leila Claribel Owens, a friend he met while in college at Texas A&M. After graduating, he volunteered to enter World War I. As a Lieutenant, he was assigned to the American Expeditionary Force’s 166th Aero Squadron. From what I have read, he writes almost nothing about what he did during his service, likely because of censoring. He occasionally listed the camps he was in, so we know that he spent time in France, Italy, and Germany. He focuses his letters almost entirely on Leila and what is happening back in Texas.

When their correspondence begins in July 1916, Edward addresses his recipient with ‘Dear Miss Leila’ but that formality occurred exactly once. 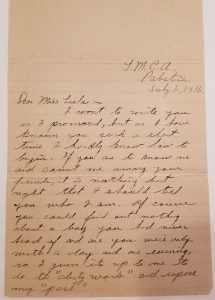 The letters are rather formal; they speak mostly of how they met and getting to know each other. 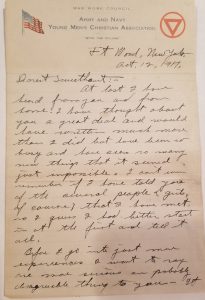 In January 1918, after a year and a half of correspondence, Edward first addresses Leila as ‘snookums.’ Reading letters like this almost feels like an invasion of their privacy! 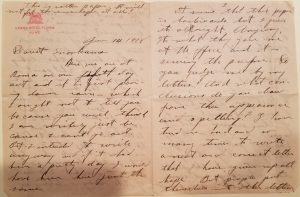 Edward also ends almost every letter with ‘LLL’ or ‘lots of love for Leila’ which is a sweet gesture. 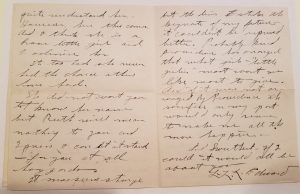 Since they attended different colleges (she went to Baylor) and then he spent almost two years in Europe, the vast majority of their friendship and courtship took place in their letters to each other. Reading their letters back to back lets us see the progression of their intimacy and the development of their love story. Over the course of his time in Europe they wrote each other rather long letters relatively frequently. Some days one would write two letters in the same day; other letters complain about having to wait for weeks at a time without a letter. I think that because of our instantaneous text messages and social media apps, we don’t truly understand just how long it took to communicate, but also how fast letters still moved. There are even a handful of telegrams, which was as close to instant communication they could get. 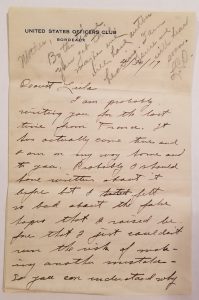 Finally, on April 30, 1919, Edward wrote his last letter to Leila from Europe. We can speculate that they spent much more time together after he arrived home, because the frequency of letters drops dramatically.

This entry was posted in Uncategorized, World War I and tagged collections, correspondence, Great War, World War I, World War One, WWI. Bookmark the permalink.