Magic and Mystical: the Occult materials in the Special Collections 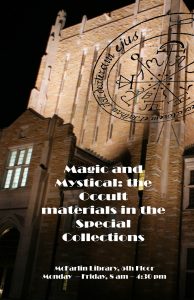 Occult is a word with several meanings.  From the Latin Occultus, it refers to secret, hidden and concealed.  This is not inappropriate for most of the materials in Special Collections, as the vast majority of our materials have been hidden from the public’s awareness for the past fifty years.

However, what we are showing is both occult in that definition, but also its more commonly used meaning today – “Of or relating to magic, alchemy, astrology, theosophy, or other practical arts held to involve agencies of a secret or mysterious nature; of the nature of such an art; dealing with or versed in such matters; magical” (Oxford English Dictionary).

So, what is a Special Collections Department doing with Occult (magical) materials?  That is a fair question, actually.

It turns out that many collectors have an interest in the Magical and Mystical.  This makes sense when you realize that “mystical” does not really mean magical, but the spiritual quest to seek a closer communion with the Divine, which can appear to take on the appearance of magical symbolism.

In 19th century Europe and America, a countercultural revolution led to what has at times been termed ‘speculative freemasonry,’ secret societies such as the Vereine,  Die Goldune Dammerung, the Golden Dawn, and further to the O.T.O. (Ordo Templi Orientis) and Argentum Astrum (The Abbey of Thelema).

The exhibit is located in Special Collections, located on the 5th floor of McFarlin Library. It is open to everyone, including the public, from 8am to 4:30pm.

The exhibit runs through mid-December.

The Librarian of Special Collections and University Archives, McFarlin Library, The University of Tulsa since November 2005.He holds a Masters in Library and Information Studies from the University of Oklahoma, and a Bachelor of Arts in History and Anthropology from Oklahoma State University. He has worked in McFarlin Library since 1986.
View all posts by Marc Carlson →
This entry was posted in Exhibits, occult. Bookmark the permalink.