Posted on 2015 September 17 by Abhinaya Rangarajan

It is common to think that three-dimensional images were an invention of the very recent past. However, the art of producing 3D images seem had been mastered decades back. The first patented stereoscope was invented by Sir Charles Wheatstone in 1838. Other early 3D image dates back to the mid-19th century with David Brewster’s improvised version of the Stereoscope in 1844. The stereoscope could take 3D photographic images.

The Department of Special Collections and University Archives proudly houses stereoscopic libraries of World War I, World War II, and Tour of the world: A trip around the world through the telebinocular, and the Stereoscopic studies of anatomy prepared under the University of Edinburgh. The images are enhanced in their three dimensional quality by providing the eyes of the viewer with two different images, representing two perspectives of the same object, with a minor deviation equal or nearby equal to the perspectives that both eyes naturally receive in binocular. 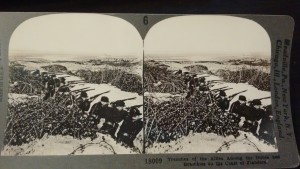 Trenches of the Allies

This stereocard showcases the deep trenches of the Allies among the Dunes and brambles on the coast of Flanders. It captures the furious efforts during the first desperate battles of the winter 1914-15. 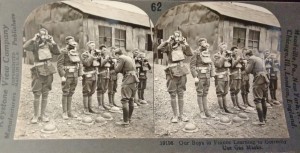 Our Boys in France Learning to Correctly Use Gas Masks

This stereocard captures the thorough drill of learning to correctly use the gas masks that the soldiers underwent under the instruction of their squad officer in France.

The stereocard collection at the Department of Special Collections and University Archives is open to TU researchers and the public. The newest exhibit at the Department also houses selected stereocards as a part of the History of Photography exhibit on the fifth floor of McFarlin Library. 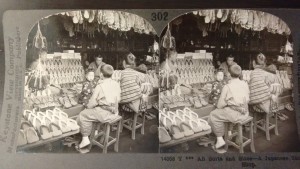 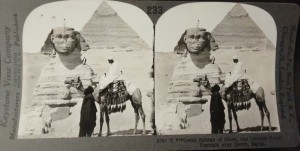 This entry was posted in Acquisitions, Collections, Exhibits, History. Bookmark the permalink.