McFarlin Library Special Collections and University Archives has an extensive World War I Collection. Our department has been collecting World War I material since the 1970s with the acquisition of hundreds of unit histories and other books comprising the original “World War I Library.” We house over a hundred separate collections of diaries, letters, photographs, and artifacts relating to the war. We are in the process of making these collections available online.

The Erwin letters were found in an antique store in Muskogee, Oklahoma. The letters date from January 9, 1918 to January 29, 1919. The collection consists of 173 letters from Erwin’s wife, Vivian (occasionally spelled Viviene), while he was stationed at Fort Still, Oklahoma and other locations. Vivian Erwin also wrote other correspondents, including Erwin’s sisters Harriet, Dorothy, and J.E.F; Erwin’s mother and father; Margaret Wyndham, a Henry Kendall College alumna and faculty member. There is also one letter from Erwin to his parents. His mother and sister may have also written him. Six unidentified photos accompany Vivian’s letter of May 3rd, 1918. One of the women in the photographs may have been Vivian because she appears repeatedly in the set. 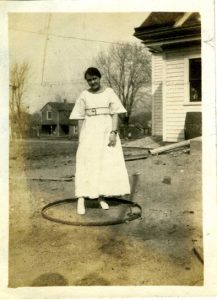 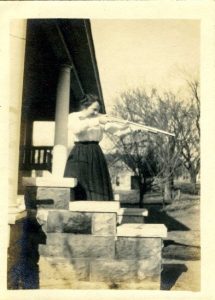 This collection originally caught my eye because of its connection to The University of Tulsa. The University of Tulsa, originally Henry Kendall College, was founded in 1894 in Muskogee. Both Perry and Vivian attended Henry Kendall College, which moved to Tulsa in 1907. He did not graduate but she did. She was also the 1913 class president. In a letter from Vivian to Perry, Vivian writes,

“I saw the girls there dancing – it bro’t back memories to me – of my life at H.KC. I was very happy there.”

For more information on the history of Henry Kendall College, please refer to our blogs from last March.

The letters detail Vivian’s daily life in Oswego, Kansas, where she lived with her parents during the war. She often writes about her health, but, most importantly, she writes of her hope for Perry’s safety and desire to see him again. In one letter dated August 24, 1918, she said,

“Honey man, I’m just living for the time when I can again take you in my arms and love you.”

She also repeatedly recounts stories of her time with Perry before the war. Her letters have a tone of desperation to know Perry’s whereabouts and how he fares both physically and emotionally. Another letter from Vivian dated September 15, 1918 reads,

“Why on earth don’t you write? Are you under quarrantine [sic] – have they transferred you, or what? You’re not tired of writing letters to me are you?”

After the war, Perry was a Newspaper Carrier and they lived near Okmulgee.

Our collections are available during normal business hours, Monday through Friday from 8:00 AM to 5:00 PM at the University of Tulsa Special Collections and University Archives.