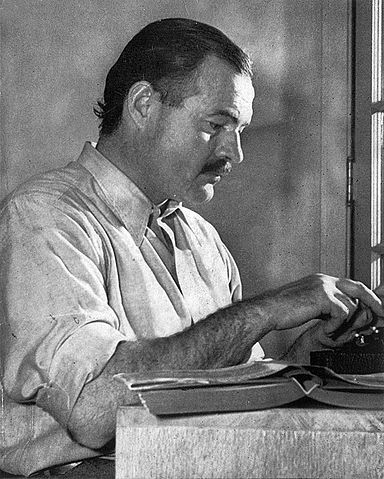 The second of four children, Hemingway grew up playing sports, performing in his school’s orchestra, and graduated to become a journalist for a short while at the Kansas City Star, where he learned to write short, dynamic sentences that would later become his signature style, influential on American writing.

In early 1918, Hemingway enlisted to become an ambulance driver for the Red Cross in Italy during World War I. While recovering from an injury sustained on duty along the front, he met and fell in love with a Red Cross nurse, Agnes von Kurowsky. The two planned to get married, but she suddenly became engaged to an Italian officer. Hemingway was married four times after that, and each time left his wife before she could leave him.

After the war, Hemingway moved to Paris, where he became friends and neighbors with people like Pablo Picasso, Ezra Pound, James Joyce, and F. Scott Fitzgerald. Much of his travels with these like-minded folk were the inspiration for novels like The Sun Also Rises, written after a trip to Spain in 1925.

Hemingway became especially known for his particular style, which has been described as sparse, vigorous, and masculine. He examined the lives of the post-war expatriates known as the “Lost Generation” and the far-reaching impact that war had on human emotions and lives.

The author went on to live in places like Key West, Cuba, and the Caribbean, all the while working on pieces like Snows of Mount Kilimanjaro  and For Whom the Bell Tolls. He covered the Spanish Civil War as a journalist and was present at the Normandy Beach Landings during World War II, though removed from the action—he was not allowed to go ashore and instead watched the waves of soldiers reach the beach from a ship just off coast.

Hemingway won the Nobel Prize for Literature in 1954 for The Old Man and the Sea. He’d been nominated twice previously; he did not go to Stockholm for the acceptance ceremony, choosing instead to send a speech to be read aloud. In the late 1950s, his health began to decline, and he bought a house in Ketchum, Idaho, where in 1961 he died from a self-inflicted gunshot wound. Years later, doctors and scientists confirmed that Hemingway was diagnosed with a condition called hemochromatosis, an inability to metabolize iron, which causes mental and physical deterioration. In addition, he experienced bipolarity, alcoholism, and suffered from concussions sustained in two airplane crashes while in Africa. The hemochromatosis may have been genetic and therefore related to three suicides in his immediate family: father Clarence, sister Ursula, and brother Leicester.

Special Collections has several record groups containing papers related to or from Hemingway, including the Ernest Hemingway ephemera collection. This includes correspondence and photographs, but also personal items, such as Hemingway’s driver’s license when he worked for the Red Cross in Italy, and his high school dance card. Hemingway’s love of hunting and fishing is here too—the taxidermist he used, Fred C.N. Parke, has a pamphlet advertising his services and describing the work he’d previously done for Hemingway.

There is also the Bifur archive, which was a Parisian literary magazine published in the late 1920s. Much of the materials are related to a wide variety of authors, including Hemingway and F. Scott Fitzgerald, and include editorial correspondence.

Our department is open to the public from Monday – Friday, 8am to 4:30pm (although we close at 11:30am on Fridays in the summer). If you’d like to make a viewing appointment, please email us at speccoll@utulsa.edu. Please note that certain collections may be located at our offsite warehouse, in which case we need at least 24 hours notice before the materials can be made available.

Melissa Kunz is a Special Collections Librarian. She holds a Masters in Library and Information Studies and a J.D. from the University of Oklahoma, and a Bachelor of Arts in English from Hendrix College in Arkansas.
View all posts by Melissa Kunz →
This entry was posted in Birthday, Collections and tagged bifur, birthday, Ephemera, Ernest Hemingway, Ernest Hemingway Ephemera, Lost Generation, the old man and the sea, the sun also rises. Bookmark the permalink.