Images of the Circus

McFarlin Special Collections is well known for its collections on World War I, modernist writers, and Tulsa history but did you know that one of our other main areas of collecting is circus material? We have 9 collections that contain circus-related materials that range from ticket stubs, photographs, programs, advertisements, and various other ephemera. One of these collections, the Traveling Circuses Photo Album, 1930s-1940s (2016.048), consists of the original photo album covers and the 247 black and white photographs that were in the album originally. 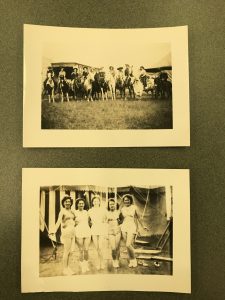 Groups of performers ready for the show

The photos were removed from the original album pages due to preservation concerns and placed into archival photo sleeves but they were kept in their original order. The album was compiled by Bert Backstein and he, along with Roy Frietsch, took many of the photographs found in the album. 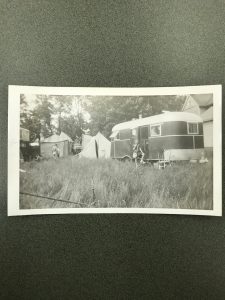 The photos show many scenes from circus life. These include the many animals that were used in circuses such as elephants, horses, goats, camels, llamas, and zebras. There are many images of performers like animal trainers, trapeze artists, and clowns; crowds waiting to get in to see the show; employees eating together in the mess area; employees setting up the tents and trailers for shows; performers sitting outside of their trailers that they lives in while on the road; trains with cargo containers that were used to transport the circuses’ materials from one town to the next; parades that were used as advertisements and sneak peeks of what visitors could expect to see at the shows; and walls covered in beautiful posters advertising the different performers and acts to be seen at the circus. These photos show scenes from different traveling circuses including the Russell Bros, the Cronn Bros, the Monroe Bros, and the Kelly & Miller Bros. 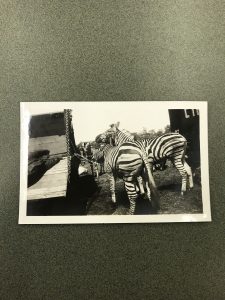 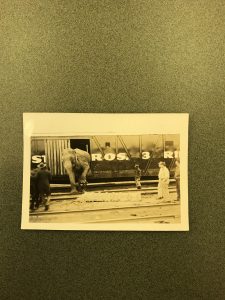 Elephant getting off of train 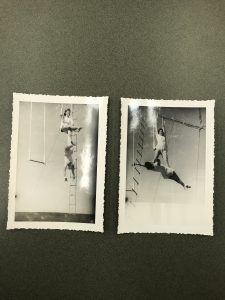 The circus has had an interesting history in the United States. The first one in the U.S. opened in April of 1793, nearly 225 years ago. This makes the tradition of the circus older than Coca-Cola. The circus has long provided a place for misfits and outsiders to belong and a place for children to dream about and threaten to run away to. The circus is a place that instilled wonder in its audiences and where the impossible and unthinkable can happen. Ringling Brother and Barnum & Bailey was by far the most popular circus and it was the longest running entertainment business. In May of last year, The Greatest Show on Earth held its final performance due to dwindling audiences and growing operation costs. Though there are other smaller circuses that still tour and perform, this was seen as the symbolic end of an era. Although the circus may not exist in all of its glory, or event at all, it will always be a place of imagination and daring feats that will continue to be explored in film (The Greatest Showman) and text.