Historic Cookbooks in the TU Collections 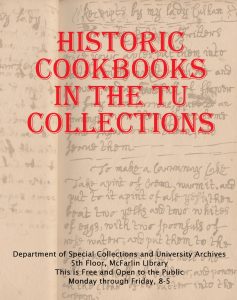 Poster for Historic Cookbooks in the TU Collections

Cookbooks, receipt books, and household manuals are far more than just the gatherings of recipes that we usually think of them as. They offer a look into their culture’s means of nutrition, histories, manners, and morals often through fascinating commentaries on those cultures.

The oldest known recipes date from approximately 1750 BCE Akkad: Meat with Wild Licorice; a Wild Fowl Pie, a type of Bread; and a form of Roasted turnips.

The Romans, of course had their own recipes, many of which survive. Arabic recipes survive from the 10th-13th centuries. Hu Sihui’s “Yinshan Zhengyao” (Important Principles of Food and Drink), approximately 1330, is the earliest surviving Chinese recipe collection.

The first recipe books to be compiled in Europe since Late Antiquity started to appear in the late thirteenth century. About a hundred are known to have survived, some fragmentary, from the age before printing. The earliest genuinely medieval recipes have been found in a Danish manuscript dating from around 1300, which in turn are copies of older texts that date back to the early 13th century or perhaps earlier.

Low and High German manuscripts are among the most numerous. Among them is Daz buch von guter spise (“The Book of Good Food”) written c. 1350 in Würzberg and Kuchenmeysterey (“Kitchen Mastery”), the first printed German cookbook from 1485. Others began to appear later.

The books in the TU collections are predominantly in English.   Those on exhibit are a portion of our materials, and include a foretaste of the depth of materials in the Jennifer Carlson Library of Historical Cookery which is being donated to Special Collections after this exhibit concludes.

The Department of Special Collections and University Archives cordially invites the TU community and the public to visit this exciting exhibit, curated by Librarian of Special Collections I. Marc Carlson. The department is located on the 5th floor of McFarlin Library and its hours of operation are Monday to Friday from 8:00 AM to 5:00 PM.

The Librarian of Special Collections and University Archives, McFarlin Library, The University of Tulsa since November 2005.He holds a Masters in Library and Information Studies from the University of Oklahoma, and a Bachelor of Arts in History and Anthropology from Oklahoma State University. He has worked in McFarlin Library since 1986.
View all posts by Marc Carlson →
This entry was posted in cooking, Exhibits and tagged exhibit. Bookmark the permalink.