ABC of Bugs and Plants in a Northern Garden 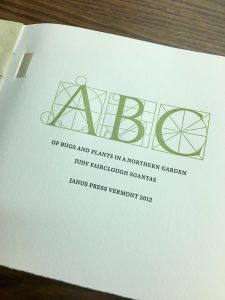 Judy Sgantas book ABC of Bugs and Plants in a Northern Garden main focus is about garden pests and plants, specifically focusing on what attracts and repels them. There are definitions for each plant and insect including both the standard and Latin names with information ranging from their typical habitat to natural control. A digital scan of the ink, graphite, and colored pencil originals are used. The book itself is a double alphabet book, with classical Roman letterforms entwined with illustrations of plants and insects. For each letter of the alphabet, there is a black and white illustration with a colored drawing, found when opening the opposing folded leaf, with text placed in the center panel between the two. For example, the black and white illustration for the letter “P” shows a Praying Mantis elegantly standing in front of the letter on the right. While the colored picture of a Peony engulfing the letter is on the left, in the center panel the definition for both the Praying Mantis and the Peony can be found, along with the description and importance of pruning. 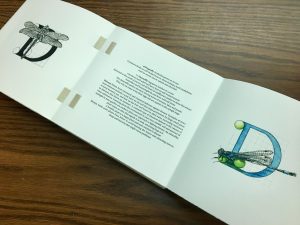 Throughout the illustrations circles of varying sizes and a grid pattern can be seen in both the black and white and colored illustrations. They play a more prominent role than one would think, which is why Sgantas gives a brief, yet detailed history on the creation of Roman capital letters in her book. “The geometric formation of Roman capitals was inspired by Renaissance interest in the monumental inscriptions of classical antiquity by such pioneering transcribers and collectors as Cyriacus of Ancona. The earliest example of a work to show diagrams of letters formed by geometrical means is a 1463 manuscript by Felice Feliciano of Verona. In 1509 the first printed edition of Pacioli’s De Divina Proportione appeared in Venice, including an appendix on geometric letter forms with different circle sizes that determine the curves of the letters and serifs. … Different designers divided the basic square into grids of nine, ten and twelve divisions to help determine the shape and proportion of the letters. The title page ABC is from Pacioli’s drawings of the alphabet in the appendix of De Divina Proportione. The classical titling…used on the box label, is from the Niebolo Foundry in Turin and was designed in 1951 by Aldo Novarese with Alessandro Butti.” 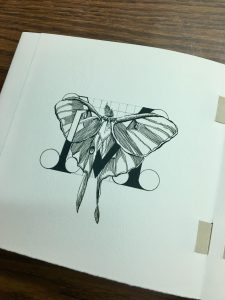 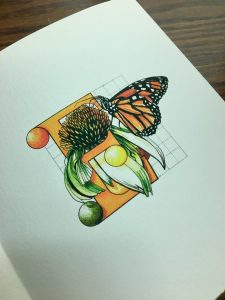 If you’d like to see ABC of Bugs and Plants in a Northern Garden (N7433 .4 S43 A3 2012 Art Undrsz) by Judy Sgantas you can always visit us in Special Collections, located on the 5th floor of McFarlin Library, Monday through Friday, 8:00 am until 4:30 pm. If you’re a fan of artists books or want to learn more about them, our current exhibit, Artist’s Books: Challenging Norms & Forms showcases 24 unique artist’s books from our collection. The exhibition runs until March 22, 2019.